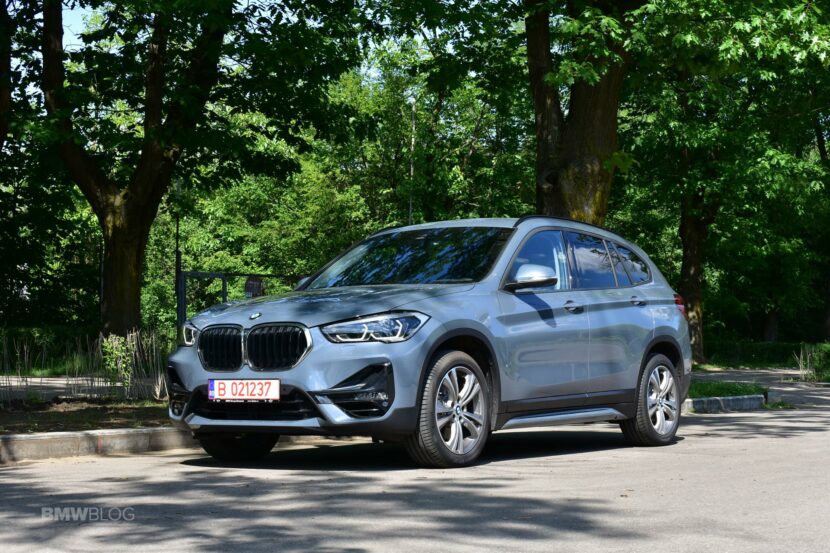 The recent test drive with the 2020 BMW X1 xDrive20i proved me that, sometimes, less is actually more. Here’s why.

A little history for the beginning

The segment of premium compact crossovers was, more or less, pioneered by BMW in 2009, when the Bavarians introduced their first-ever X1 model. Codenamed E84, the first generation was developed on the on the same rear-wheel drive platform as the E91 3 Series Touring.

The X1 was also offered with rear-wheel drive, basically on the low-end variants such as the sDrive16d, sDrive18i, sDrive20i and sDrive20d.

The E84 was replaced in 2015 by the current F48 generation. The concept was radically different, as the second generation X1 was developed on the front-drive UKL architecture. This meant only smaller, 3- or 4-cylinder, transversally mounted units were now offered in the engine lineup.

Last year, the F48 received a Life Cycle Impulse, which sharpened up the looks of the X1 and enhanced the range of powertrain, driving assistance and digital technologies.

Of course, some die-hard fans would comment that the X1 is not an entirely true BMW adhering to the core values. But after a weekend spent with the facelift X1 xDrive20i in the Sport Line trim, I came to realize it is actually a surprisingly good model.

The LCI has done wonders to the X1, as the compact Sports Activity Vehicle is now sharpened and more elegant than the pre-facelift generation.

Even though the FWD platform dramatically exterior styling, the X1 is surprisingly good looking, with an even more balance and cohesiveness than the preceding E84 model.

The kidney is now slightly larger, in good BMW fashion. The LED headlights and the reshaped front air vents give the whole car a powerful appearance.

The X1 LCI also features a minor rejuvenation of the tail lamps, with revised lighting signature. All in all, at least on the outside, the new BMW X1 is by far the looker in its class.

I came to appreciate the clearly structured dashboard of the X1 as well. It bears the essential driver-oriented center console and all controls within close range.

The operation of all primary vehicles function is simple and intuitive thanks the cleverly organized center console and the crisp analogue-digital instrument cluster.

The dashboard is styled primarily with functionality in mind, but it is also an exercise of design, blending in sportiness and elegance. It still carries on with a classic style, but also incorporates modern features such as the huge, 10.25-inch Touch Control Display of the Navigation Plus system that was fitted on the tested X1 xDrive 20i.

The underlying infotainment interface relies on the BMW iDrive 6.0 generation. This is very close to the new BMW OS 7.0 and offers a great and natural human-machine interaction.

All functions and menus are where you’d expect them to be. Basically, you can never find yourself in a stressful situation when you can’t find what you are looking for.

The sport seats with electrical operation provide a decent level of comfort and lateral support, but don’t expect more. They are smaller in size than for the 3 Series, for example, and can look microscopic if you’re not accustomed to such dimensions.

The driving position can be easily adjusted, but mainly remains high or at least it gave the impression I was a bit above other standard cars on the road, even though I wasn’t driving an X3, for example.

However, this taller position, even with the driver seat adjusted at its lowest point, improves the visibility dramatically and can be an essential factor in ensuring a great level of safety.

With a trunk capacity of 505 liters, the X1 can also fit in a wide range of luggage. Just make sure they are not to too tall or wide, and you can essentially arrange them in different configurations.

The overall length of the X1 is also of great help in crowded cities, where finding a free parking space can be quite of a gamble. Add in the fact that X1 xDrive20i Sport Line that I tested also helped me with the optional Parking Assistant.

I can easily conclude the X1 is quite perfect to wander around in the city area. It can go onto dirtier surfaces as well, but don’t fooled by the xDrive. The X1, even though fitted with the AWD chassis, is not an X5 and can hardly be a good contender in the offroad.

The maximum torque of 280 Nm (207 lb-ft) is available as early as 1,350 rpm, thanks to the optimized BMW TwinPower Turbo technology. The efficient direct, high precision petrol injection also helps achieves low consumption values, even in cities.

This very petrol powerplant is hardly noticeable in the cabin at low speeds, since the noise level is significantly below the one of a similar diesel unit – like the B47 installed on the xDrive20d variant.

Although I am mostly used to cars with large engines, like the M57 on my E60 525xd, the 2.0-liter petrol burner is quite spot on, with good acceleration times and potentially sporty character if needed.

Linked to the 8-speed Steptronic transmission, shifting sequences are short and fast, providing a good engine balance, a consistent power delivery and an unobstructed functioning.

In the Sport mode of the gearbox, the engine sharpens up and the power boost is equally impressive given the cylinder displacement of the engine.

If needed, the X1 xDrive20i can sustain a good acceleration as long as the driver wants, without letting the impression of being impaired or tired by this job.

The B48 powerplant is also frugal enough. I preferred using the ECO PRO conservative mode in a substantial basis as I travelled mainly across the city. However, due to heavy traffic even during the weekend, I never managed to decrease the overall consumption below 8.0 liters/100 km.

You also have to take into consideration the fuel tank capacity of 51 liters. At its utmost limits, the petrol engine will exhaust its resources quite rapidly and you’ll be in for frequent travels to the refueling stations.

For a moderate use, the X1 xDrive20i is perfect. Moderately frugal and sufficiently vivid for a 4-cylinder powerplant.

Just the right kind of powering solutions that the compact X1 really needs.

The suspension of the facelifted BMW X1 provides an average level of comfort. Not great, not terrible, as someone in a movie once said. Going on bumpy roads provides a good absorption of shocks and a reduction of their intensity towards the cabin.

The COMFORT or ECO PRO modes are best if you suffer from back aches. On SPORT mode, the chassis provides a stiff ride which loses any sense of comfort. It’s engaging, but on the long term, not very preferable.

The steering feel, although electrically assisted, can be considered overall adequate. The tuning of the steering wheel is precise enough to provide a consistent feedback and not feel numb or passive.

While it can hardly be a fun car to drive, the BMW X1 is a correct proposition for most of the drivers. It can mainly be considered a competent alternative for driving within crowded cities or between them.

The X1 I drove had a price of 58,500 euros, with all taxes included. This meant a load of driving assistants were specced in. From the Parking Assistant to the automated pilot and highway assistant, these ultimate clever solutions are aimed at further enriching the driving experience and improving the safety aboard the X1.

In the end, I can conclude that the 2020 BMW X1 xDrive20i is the type of car that most clients are looking for. With the correct equipment package, I can guarantee the X1 can ideally become a perfect car for many, even though it is not quite as engaging as some would expect.

Would I buy one?

If I were to consider having a second car, the X1 facelift would be on the short list of candidates. The X1 can be a great companion for your daily commute and its most important attributes are the frugal petrol engine, at least in the case of the xDrive20i, and the great versatility and city suitability.

Furthermore, the new X1 LCI is certainly an attractive car, from many points of view. The user experience is straight-forward and if you have the extra funds, you can end up with a great X1 loaded with the latest tech.

It may not be as thrilling or engaging as other high-end BMW models, but the X1 is an incredibly correct and convincing car, in all aspects. And certainly, it won’t let you down.