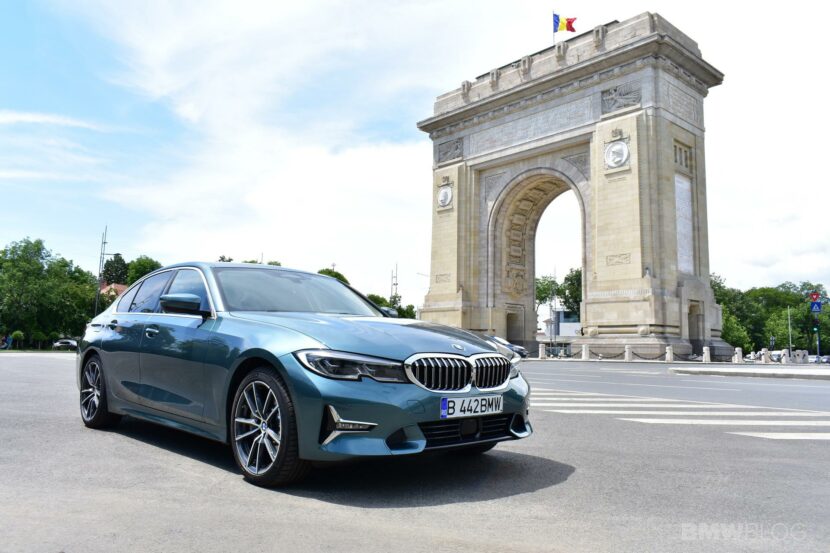 The new BMW 330e is proving to be an all-rounding plug-in hybrid vehicle, providing an interesting trade-off between dynamic performance, electric range and a reduced fuel consumption.

For BMW, this is their second take on the 330e, after the first F30-based model was introduce during the course of 2015. Compared to its predecessor, the G30 generation of the electrified 3 Series features a radically improved powertrain, doubled by the sharp, powerful styling.

Visually, the former 330e iPerformance (as this was its official title) stood out in the range, thanks to eDrive badging on the C-pillar, BMW i blue accents in the kidney grille and surrounding the wheel hub cap. Of course, there were BMW i logos also sitting on the vehicle front wings.

Now, the new 330e is seamlessly immersed into the 3 Series lineup. As the iPerformance branding was officially dropped in early 2019, the plug-in hybrid is now depicted only by the separate flap hiding the electric charging port on the front left wing of the car. That feature was also present on the first F30 model as well.

Furthermore, the eDrive logo is emphasized on the engine cover. You also get a default eDrive emblem displayed in the digital instrument cluster of the optional BMW Live Cockpit Professional package.

The 330e that I tested recently comprised almost all the possible optional equipment on offer for the plug-in hybrid 3 Series.

The electrified Bimmer came in a spectacular exterior paintwork, further reminding me of the environmentally-friendly powertrain hiding underneath the metal: the Blue Ridge Mountain metallic.

The car looks absolutely brilliant in this color, turning heads when passing on the street and displaying the specific shining of a precious gem, similar to the jade stone.

The 330e was also fitted with summer tires wrapping 18-inch alloy wheels with V-spoke design, which further prove to be beneficial in reducing fuel consumption and electric range compared to the noisy and draggy winter tires.

BMW’s Luxury Line trim gives the whole car a sovereign elegance. The 330e features chrome accents on the front and rear bumper and chrome ornaments surrounding the side windows.

Furthermore, the plug-in hybrid also boasts the range-topping BMW Laser headlights, which deliver a spectacular effect with their striking DRL signature and blue accents on the light projectors.

Inside, the 330e is dressed in a Vernasca Black leather upholstery with contrast stitching in white, whereas the dashboard and center console are adorned with Aluminum mesh effect ornaments.

The major attribute is the cutting-edge plug-in hybrid powertrain. You get the 2.0-liter, B48 4-cylinder petrol engine from the 320i, mated with an electric unit.

The official top speed communicated by BMW reaches 230 km/h, with the 0 – 100 km/h acceleration taking as little as 5.8 seconds.

The combined output is channeled towards the rear wheels with the help of an 8-speed Steptronic automatic gearbox, ensuring short shifting times and an accurate functioning.

Thanks to standard-fitted XtraBoost feature available in the SPORT mode, the peak output increases to 292 PS (288 hp) for up to 10 seconds, thus sustaining an aggressive acceleration and a thrilling sensation.

In the digital instrument cluster of the 330e equipped with BMW Live Cockpit Professional, you can also find an interesting indicator in the form of a blue-painted car silhouette with the “e” letter from eDrive attached to it.

The indicator is more complex than initially thought since is designed to show only how much distance is covered by the 330e in pure electric mode, but also how much can the driving style contribute to recuperate the lost energy from the battery and thus improve the all-electric range in terms of additional kilometers gained.

The high voltage Li-Ion battery, fitted in the lower compartment of the trunk, has a net storage capacity of 11.15 kWh. BMW promises an all-electric range of 59 to 66 kilometers in NEDC. As per WLTP, the figures are lower, at about 51 – 59 kilometers at maximum.

In reality, those values are a bit too optimistic, to say. The practice of driving in congested traffic and for longer than 30 minutes provides a harsh reality, taking its toll on the high-voltage battery.

At its best, during normal traffic values, I managed to run in pure electric mode for just about 35 to 40 kilometers on a single battery charge, setting off with a 100% charging status.

The stored electricity quickly drains out under constant driving stress applied to the battery. The energy recovery from the coasting and braking phases is not enough and cannot keep the pace with the sustained electric consumption.

The HYBRID ECO PRO or ADAPTIVE modes can provide a more efficient hybrid configuration, so that the electric unit continue to function for a longer period.

With a 100% charged battery, I managed to cover around 31 kilometers within the city at its best, being faced with moderate traffic and with over 95% of the distance covered in pure electric fashion.

This also helped reduce the overall consumption of the petrol engine up to around 5.7 liters / 100 kilometers. But, as soon as the battery was depleted in terms of electric current, I was left with only the petrol powerplant running.

Afterwards, I switched the driving mode to SPORT XtraBoost, and unleashed the brute force of the 4-cylinder unit. I also managed to somehow recharge the battery from a near 0% status to a value which would have enabled me to go all-electric for another 5 kilometers.

Yes, I have to recognize that running in SPORT mode meant that the fuel consumption jumped abruptly from 5.7 liters / 100 km to just about 6.9 liters / 100 kilometers. But, who cares? I had so much fun driving with the SPORT XtraBoost mode on.

However, the potency, sustained power delivery and acoustics of the 2.0-liter engine are impressive and provided me with a thrilling driving experience. I never thought I would have that much fun in a plug-in hybrid electric vehicle.

With a kerb weight of 1.85 tonnes, the 330e, with its rear-wheel drive traction and added high-voltage, weighs almost 300 kilos more than the 320i or 330i versions. However, the extra kilos are barely distinguishable, even when running with the ICE unit only.

The boot capacity is at disadvantage in the 330e. At just 375 liters, it is 105 liters lower than the conventional powertrains. Even though the battery is positioned as low as possible, it still takes its burden the overall storage capacity.

Another shortcoming of this architecture is the fuel tank capacity. If a normal 320i or 330i model boasts 59 liters, the plug-in hybrid 330e is good for only 40 liters.

For longer routes, between cities, the energy stored in battery also drains rather fast, but you can rely on the SPORT XtraBoost mode to partially make up for the lost energy, whilst also experience typical BMW driving dynamics.

When it comes to suspension and dampers, the 330e boasts a versatile mix between dynamism and comfort. The car feels very secure and glued to the road, while also absorbing all imperfections and reducing their effect in the cabin.

All in all, I must confess that the BMW 330e has more positive attributes than weak spots. Furthermore, it is exceptionally serene and also engaging to drive when needed. Driving a plug-in hybrid is a piece of cake, but it also requires to adhere to a certain routine.

To make the most out of the benefits of the hybrid architecture, you need to make sure that you constantly charge the car. Don’t exaggerate with fast charging though and do to at least 10 normal charging cycles before “refueling” at a DC station.

For me, it proved to be fairly easy and convenient to recharge the 330e at home, using the normal charging cable provided by DELPHI Technologies. The car also came with an optional BMW i fast charging cable as well.

To fully recharge the battery, the 330e needed around 4.5 hours – 5 hours using a conventional power socket. So, yes, life is simple and fun with a plug-in hybrid if you have decided to purchase such a model.

The tried-and-tested BMW 330e came up with a load of assisted driving technologies. Doubled by the electric drive of the powertrain, you can really say the 330e is really one step closer to the future of electromobility.

The sensitivity of the driving and active safety assistants can be conveniently configured using the menu of the BMW OS 7.0 infotainment interface.

You can set the braking assistant to respond sharply when needed or to shut it off completely, if you want. The autonomous driving feature can also be adjusted within some pre-defined safety limits, taking car of your speed, road signs and other cars on the same and adjacent lanes with the 330e.

Apart from these, the 330e can also brake on itself, if the situation demands it, and can warn of impending vehicles in the blind spot of the car.

The plug-in hybrid 3 Series also comes with a multitude of cameras and can park itself under the close supervision of the driver. Also, it is possible to park the 330e remotely, thanks to the Valet Parking feature, which is especially helpful for getting in and out of tight spaces.

As mentioned earlier, the optional BMW Live Cockpit Professional was part of the equipment of the tested 330e. Boasting a clearly structured and intuitive interface together with impeccable graphics, this system is likely the best in the industry right now.

Besides the rotary iDrive knob, navigating through the menus is further possible using the Touch Control Display, the Gesture Control and the BMW Intelligent Personal Assistant.

Would I buy one?

Now that I understand the convenience of driving plug-in hybrid, the 330e seems a natural choice. I can live with the fact that the cargo space is rather reduced in the trunk.

Setting up a daily charging routine becomes second nature and the benefits certainly exceed the shortcoming of the 330e. This plug-in hybrid 3 Series has taught me how pleasant and serene a silent ride can be.

Yes, I do appreciate the roaring underneath the bonnet, but the characteristic acoustics when driving purely electric together with great ride comfort create a decisively unique atmosphere aboard the 330e.

So, after recharging, let’s unplug and play.